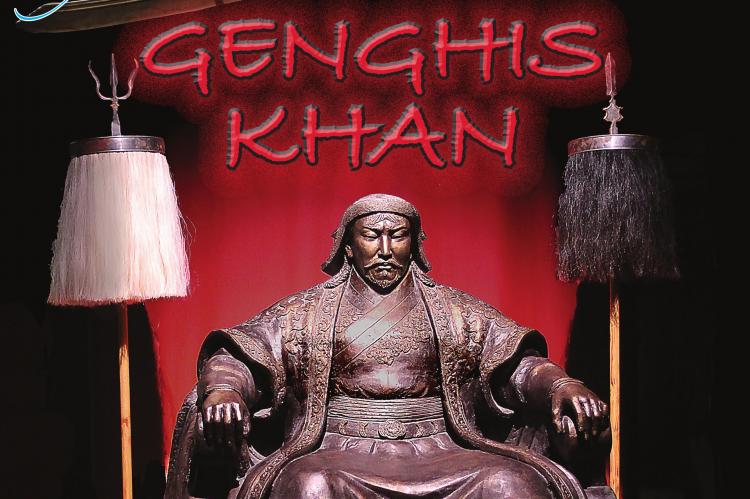 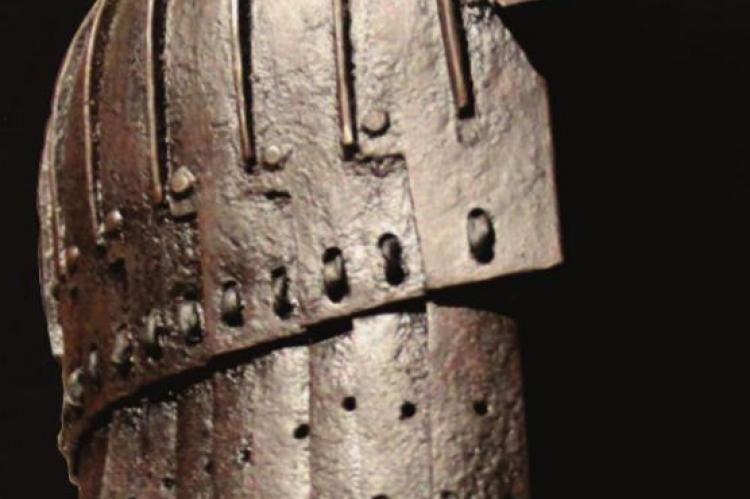 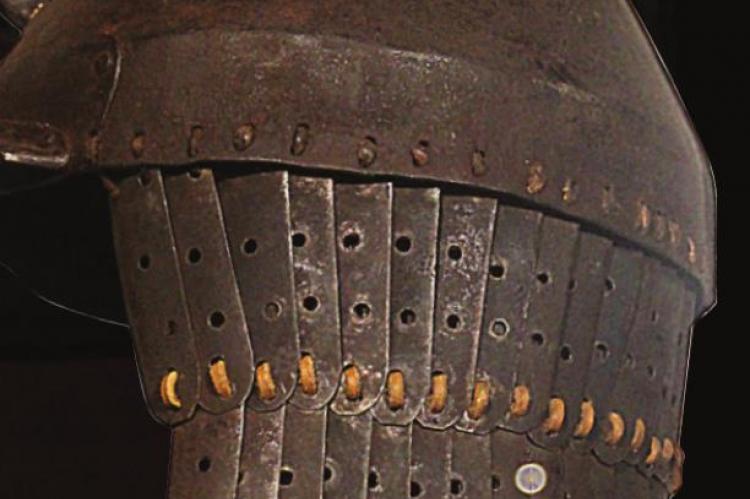 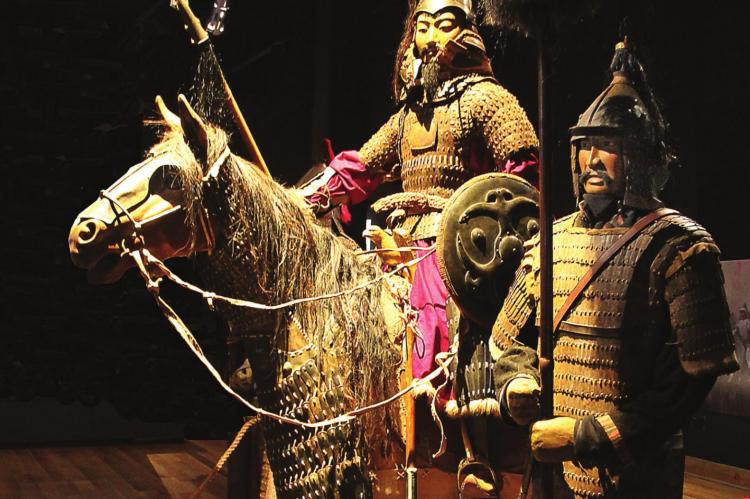 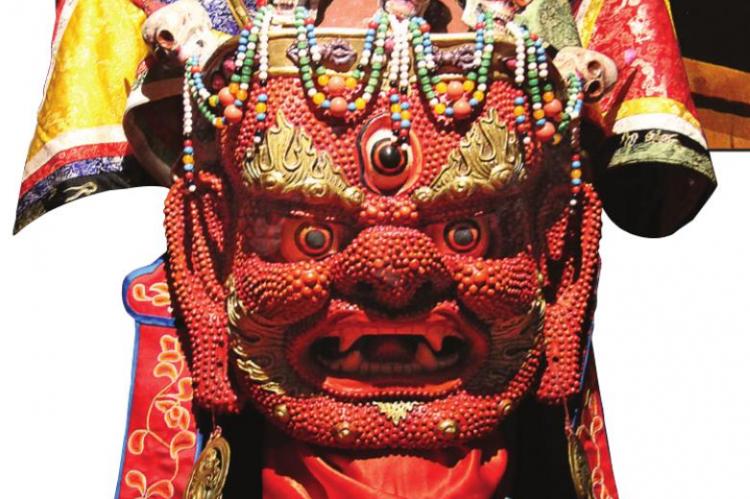 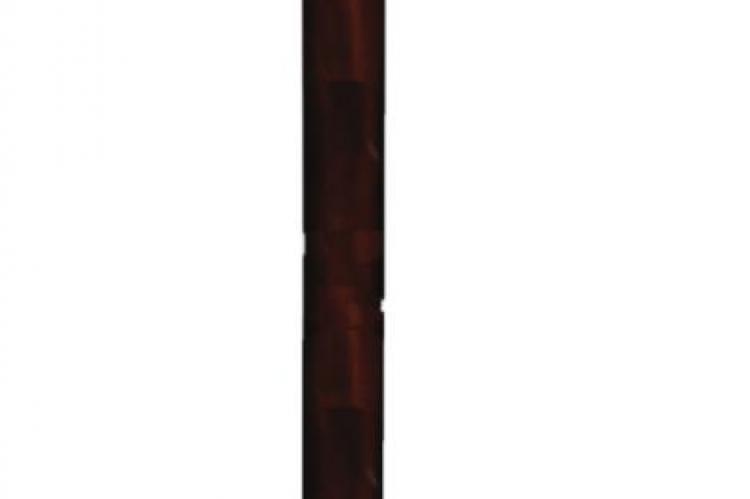 The pounding of drums, reminscent of the pounding of the hooves of Mongol hordes on horseback, thunder in the cavern-like setting for “Genghis Khan: Bringing the Legend to Life.”

Larger than life, larger than death, Genghis Khan sits upon his throne He may brood, considering how much more of the world he might have conquered had he lived longer Or perhaps he experiences serenity, knowing he established a dynasty that his children, his people, spread throughout much of the known world starting in the late 1100s.

Those are some of my thoughts as my wife, Tricia, and I stand before the statue of one of the world’s greatest military conquerers. He occupies the entrance to Union Station’s latest, temporary exhibit.

I ask whether Tricia wants to climb up to sit on the great emperor’s lap for a selfie, something to send out to everyone on Facebook. A docent, not familiar with how we like to play – I make lot of unabashedly absurd statements for fun – cocks an eyebrow at that particularly dim-witted variation on humor.

What follows our moments spent admiring the statue provides more than an old-fashioned museum experience.

About 20 of us enter a room, where we sit to watch a video that lasted a couple of minutes and introduces everyone to the emporer.

“Howdy. How are ya? Do any pillaging today? Drink yourself stupid? Kiss your horse?”

Actually, we do not get to know the big guy all that well, just enough to acquaint us with why someone who died in 1227 – nearly 800 years ago, and buried in a grave hidden half a world away – still interests crowds of people willing to lay out $15 for a ticket.

After the intro, the screen opens like a portcullis into “the empire.”

Again, not a typical experience, though rest assured people who want to know the past so they can get a sense of the future have their brains massaged by wonders culled from centuries past and arranged artistically in a cavernous setting – big rooms with high ceilings and lots of mood-inducing shadows punctuated by lights placed strategically.

Some of the treasures date to the 1200s and those early, heady days of Khan’s empire, when his armies – there is no nice way to put this – would rape, kill, pillage and burn – though that is not stated in such stark terms by the exhibitors for what is meant to be a family experience.

Other treasures in the exhibit date to as late as the 1800s, showing how his descendents and his legacy endured long after Genghis Khan’s death. The cases of artifacts included gold jewelry and ornaments; silk robes; metal work; and pottery.

As expected from a dynasty built on conquest, many of the pieces on display involve instruments of war. A dramatic, imposing arrangement shows a fierce-looking soldier sitting on horseback between a couple of footsoldiers, all armored and armed to the teeth, toes and points between, as in, “Don’t mess with me, man. I’ll get medieval on your face.”

Among the swords and knives, and the chain and plate armor, rests one of the most feared and effective weapons employed by the Mongols – an original recurve bow, a sophisticated and deadly piece of ancient technology. Around the same period, the English longbow that gave the French such grief at Agincourt could be launched about 250 yards, which is helpful when trying to keep an enemy from getting close enough to knock one on the noggin with a mace.

The Monguls used a smaller, more powerful, curved bow that could launch an arrow more than 500 yards – and they could shoot while riding horseback. The exhibit includes various observations from Genghis Khan and others, including an inscription from around 1226 that claimed a man used a bow to hit a target 586 yards away – close to the length of six football fields, though no one is inferring anything about Chiefs fans and how to approach the coming Su per Bowl game against San Francisco.

One of the interactive aspects of the display that Tricia like involves following the lives of particular characters. Guests receive a card bearing a person’s name and at various stations along the exhibit route, guests may check on the person’s life at that time period.

In addition to the initial short video, several other videos along the way cover various aspects of the culture that Genghis Khan inherited, molded and passed on to future generations.

Another aspect of the presentation that draws applause is the live Mongolian music and dancing. The beating of drums seems to summon images of the Mongol horses, tens of thousands of hooves pounding the plains and sounding like rolling thunder. The Mongol horsemen provided the inspiration for George R.R. Martin’s Dothraki horsemen in “Game of Thrones.”

Tricia and I make the day trip to Union Station without great expectations. We take morning breakfast at Harvey House, a restaurant harkening back to the original 84-member Harvey House chain that provided lowcost fare to travelers along train stops from roughly Kansas City to California. The food remains good, but pricier, and should have be served hot, not barely lukewarm.

We then paid homage to the king and finished the visit by taking in the Robert Downey Jr. version of “Dr. Dolittle” on the station’s 80-foot-by-53 foot theater screen. The movie, set during the rule of Queen Victoria, does not represent historical accuracy, and made little pretense of doing so, except for the costuming and some settings. The special effects, though rendered with exceptional skill, offered nothing ground-breaking in this age of “live-action” movies: “The Jungle Book,” “Dumbo” and “The Lion King.” Still, that super-sized screen makes everything better and, ignoring all forms of obsequiouness to MENSA, my wife and I like “kid movies” and this one comes off as fun. So, there, MENSA. Humpf.

Union Station provides a good way to spend a rare day off together and we look forward to our next adventure there.