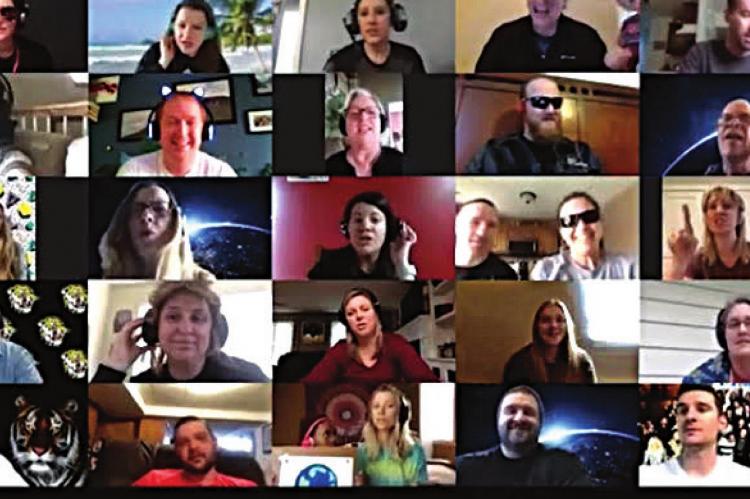 EXCELSIOR SPRINGS – Once upon a time, when a person referred to as “The Boss” wore an electric guitar rather than a suit and tie, and a young man did not use his single glove as an oven mitt, the world’s No. 1 musical artists gathered to shine light in the darkness.

Luminaries known worldwide – a few being Bruce Springsteen, Michael Jackson, Bob Dylan, Ray Charles and Stevie Wonder – sang together in 1985, hit No. 1 on the Hot 100 chart, achieved Grammy Awards and, most importantly, raised today’s equivalent of $147 million to aid Africans in need. They sang:

“We are the world.

“We are the children.

“We are the ones who make a brighter day, “So, let’s start giving.”

That song for the ages, “We Are the World,” which lifted spirits in a troubled time, came to Excelsior Springs High School physical education teacher Terry Irons while she contemplated the coronavirus and messages seen on social media.

“I’ve just been seeing a lot of teachers talking about how much they miss the kids, and they were sharing stories about messages they’d received from kids, saying, ‘I just want to be back at school. I’m bored and I miss it, and I miss you guys.’ It was kind of going both ways – teachers talking to kids and kids talking to teachers. And I thought (a video) would be a fun way to get our faces out there to let them know we’re thinking about them.”

The thinking transcended helping students learn online while schools are closed; rather, it focused on missing in-person connections, she said. Irons’ contemplation excited imagination, and imagination led to the production of a lipsynch remake by about 50 high school teachers of “We Are the World” for each other, students, patrons and the world.

“I don’t know why it popped into my head,” Irons said, but the idea stuck and she messaged other teachers. They agreed to participate in the homage.

The teacher kept the masters’ voices in the video, but substituted their own performances in each role, she said.

“ There comes a time when we heed a certain call,

“When the world must come together as one –

“There are people dying.

“The greatest gift of all.”

“It was just a blast to be able to do,” Meyer said. “My wife (Jessica Meyer) and I both teach at the high school and we and our girls just had fun doing our parts. I was lip-synching to The Boss, Bruce Springsteen, and my wife was lip synching to Stevie Wonder.”

A fellow teacher “nominated” Jeff Meyer for the part. ‘

“They just thought my voice, the raspiness, was pretty similar to Bruce Springsteen. I guess we’re a spot-on match,” he said, tongue pressed firmly in cheek. ‘

“That someone, somewhere soon (will) make a change.

“We’re all a part of God’s great big family

“And the truth, you know, love is all we need.”

Older teachers jumped at the chance to remember and mime musical idols from their childhood, but younger teachers needed a bit of musical education.

“I shared the video link from YouTube of the actual video, because half our staff’s so young they’d never seen it before,” Irons said. “They didn’t know the song.”

“I was pretty confident that I could pull it off,” she said, because she had time to work on the part before doing the recording.

Each teacher performed and sent their segment to Irons.

“Then, I started editing it together remotely from home,” she said. “We did it all remotely and everybody was right on it, and it was really kind of fun. Every time I’d get a new video in, I’d just crack up. … Everybody was great sports.”

“The credit really goes to coach Irons,” Meyer said. “She did a phenomenal job coming up with the idea and then doing the hours of editing, putting it all together. … Hopefully, it’s something that can bring a smile to people’s faces during these times.”

“It turned out really awesome,” Everett said. “We’re all just looking for a way to not only stay connected with each other, but more importantly, we’re still trying to be connected with our kids and our community.”

In addition to about 30 high school soloists, a Zoom session united about 20 more people, who provided the chorus, Irons said. Roughly 30 hours of work over several days went into completing the video, Irons said.

“I’m really proud of the work that our staff did,” Everett said. “We were hoping to bring some smiles (to students) when we can’t see them in person.”

The reason for the video gets down to people caring for others, she said.

“We obviously all wish we could be with our students right now, but in the absence of our real-world connection, we’re trying to give them a virtual connection,” Everett said.

“We just wanted to have some fun,” Irons said, “and send them a message that we’re here, and even though we can’t be together (physically), we’re still doing stuff together to hopefully bring a smile to not only the kids, but the community.”

“We are the world.

“We are the children.

“We are the ones who make a brighter day,